Thanksgiving Dinner at the IW Club.

It feels like a long time since we have last written. Well I guess it has! We spent 2 nights at the Crazy Horse RV Park in Lake Havasu, AZ. Wished we had more time here, as it was a really neat spot. Our parking place was right on the lake so we were able to use the kayaks. We did a long paddle around the island we stayed on and under the London Bridge. Apparently it is part of the original 1831 London Bridge that was purchased and shipped over in pieces in the 60’s and reconstructed here in Lake Havasu. Kind of cool. We also ran into our friend Matt’s next-door neighbor. They saw our Washington plates and we got to talking…random. 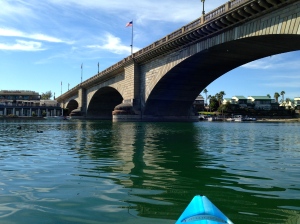 We rolled into the Emerald Desert RV Resort in Palm Desert on a Friday afternoon and just pulled out this morning. This is the longest we have stayed in one place (2 ½ weeks) and I tell you it was fantastic. This was probably the nicest park we have stayed in yet. It was very resorty with a nice pool, workout room, clubhouse and lots of planned activities. Our favorite was every Saturday morning out by the pool, Muffins & Mimosas! We were also perfectly located only a mile and a half from where our group was staying. Mom & Jeff at Palm Valley and Sunny, Mitch, Shelly, Marc, Gom, Jerry & Ann at Desert Falls.

Besides the group above, we were also able to see some other friends and family who were down in the area. Alicia & Renee were down for a getaway weekend in the beginning of our stay, so we spent one night out with them. Mike’s Aunt Melanie came over to our Apple Cup party. And, we saw Brent & Ashlie Johnson a few times, including a night out in old town La Quinta that was really fun! 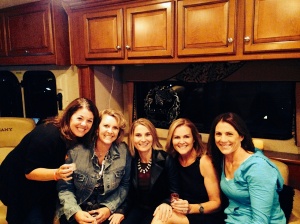 Me, Sunny, Laurie, Renee & Alicia – prefunc in the MoHo 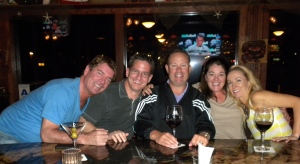 We golfed five times (Mike six) at a variety of courses; some we had played before and others were some new ones for us. The weather cooperated most of the time and was typically in the high 70’s, but we did run into a bit of rain, which seems unusual for PD. We were still able to get some pool time and a good dose of Vitamin D! We had some fun dinner’s out, especially at one of our favorites, Villagio’s. Also, a tasty breakfast at the La Quinta Bakery. And, a great spaghetti feed at Ann & Jerry’s and yummy taco fest with Mom & Jeff at their place.

We had a large group with us, not everyone for the entire time, but for Thanksgiving, our whole group of 11 was together. Eight of us golfed in the morning, then we went to the IW Club at Indian Wells for an early 4:30 dinner. We had a big table out on the patio with heat lamps and enjoyed a delicious dinner, nice wine and great company. We made our way to The Nest for a post dinner cocktail and all sat at the piano bar requesting songs and people watching. I can’t think of a better way to spend Thanksgiving! 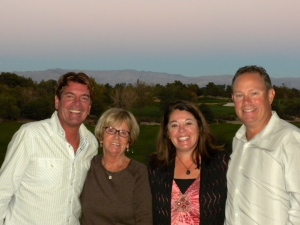 For the big Apple Cup game, Mike & I decided to host a tailgate and viewing party at the MoHo. We had 13 people over and even picked up a few stragglers at the MoHo park. We had indoor and outdoor viewing going, BBQ’d brats at halftime and played Bocce Ball. Unfortunately, the Cougs were not able to pull it out. We had a 3 to 1 Coug vs. Husky ratio, so Mike definitely felt the thrill of victory and let us know it. Regardless, it was a great day and so fun to have a group together for the big game!

Mike on the BBQ!

The Pflu’s and Cameron’s left on Sunday morning and that was extremely difficult for me saying goodbye to my best friends. We had one more night with my mom & brother, then they were gone on Monday. Another very hard goodbye. This left just Mike & I so we decided to head up to Joshua Tree National Park for the day. Both of us had been battling a cold and cough, so we didn’t do any big hikes, but just enjoyed the scenery and took a few short walks. Back to the MoHo for the big Monday Night Football game with our 12th Man flag flying – what a fun game to watch! We packed up this morning and were on the road by 9am for the trip to Tucson where we will visit my dad.

The Desert is a special place for us as we got married here. It has been a place where we have continued to vacation especially for Thanksgiving. This time was obviously very special since we were able to spend time with so many great friends and family after being on the road for 5 months. It has been on the books ever since we left Seattle in May, so it has always been on my mind that we had this to look forward to. But leaving feels bittersweet to me as this is now really the start of our adventure where we will be gone for a year and on the other side of the country. I am looking so forward to what is ahead, but it was very hard to say goodbye. I do have some fun rendezvous’ in the coming months though which I am excited for. But, as I type this and it is just Mike & I driving down the road, I feel at ease and very happy.

Mike & I at Joshua Tree NP