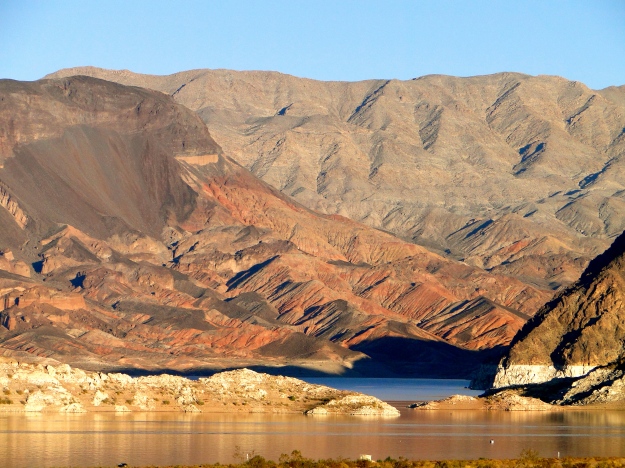 We had 3 nights unplanned before heading to Vegas for Shelly’s big birthday weekend. We decided on Lake Mead RV Village at Boulder Beach for some relaxation. This was a place we stayed last year during our trial trip, so we knew it would be spectacular. The sites are facing the lake with the red-orange hills behind, making the view look like a painting especially at sunset! The drive from Camp Verde took about 6 hours, so when we arrived we got set up and enjoyed the sunset and a nice evening cooking and relaxing in the MoHo.

Our site at Lake Mead – love this view!

The next morning, we took the kayaks down to the lake and tooled around for a few hours exploring. The fish were literally jumping all around us. This is a very clean, clear lake so we could see down to the bottom in places near the shore. It was about 75 out, so perfect for kayaking. Back to the MoHo for an early dinner then we headed up to the local casino. It was completely dead and no tables open. We each dropped about 20 bucks in slots and decided to just head back for a good night’s sleep.

Thursday, we drove through the Lake Mead recreation area and ended up at Lake Las Vegas. This place just popped up out of nowhere with mansions, condos and high end looking hotels. I’m curious if this area is surviving, as it seemed pretty deserted. We continued our drive and looped around through Henderson and back to our campsite. We decided to have an outdoor fire and Mike cooked up steaks right on the grates. We enjoyed a nice salad and some sautéed veggies and of course a nice bottle of red. 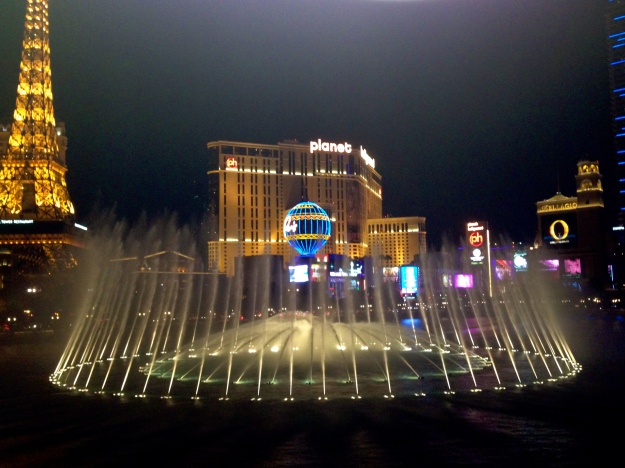 The view from our dinner at Yellowtail, Bellagio (the crazy)

Friday, we were off to Vegas, only about a 45-minute drive. The Pflu’s and Lindley’s flew down from Seattle and arrived at 10:30am. The plan was to meet at their hotel, Mandalay Bay. Mike & I rolled into the Oasis RV Park, just 5 minutes from the strip and set up. We then drove the car to Paris where we had a few comp hotel nights. We checked into the room, then made the trek down to Mandalay. On a map, it looks like 2 blocks, but these are Vegas blocks…45 minutes later we arrived. We met them out at “The Beach,” the very cool sandy beach pool. They were actually staying at “The Hotel” which is the all-suite hotel right behind Mandalay Bay, so we headed up to their rooms to get caught up and have a few drinks while they all changed and got ready for the night. The boys hit the sports book to make their football bets for Saturday and we all gambled for a bit before dinner. We found a great Italian place right at Mandalay, which was delicious. We decided to head over to the Luxor for gambling since the table limits were a bit more reasonable. The big winner for the night was Marc Lindley. I put my head on the pillow at 3am and think I outlasted everyone.

Needless to say, I slept in, while early riser Mike headed back to Mandalay to meet Marc Pflu to get a table in the sports books for the day of football. Everyone was on their own schedule for the day, but eventually we all ended up together watching football for the afternoon. Shelly & I decided we wanted to look into Garth Brooks tickets. This was his last show of the season and it was sold out, so we got on Craigslist and found a ticket broker with 2 tickets. It was a bit of a splurge but this is one of the best concerts I have ever been to. It was at the Wynn in the Encore Theater, which is a very intimate setting. Our tickets were in the first row of the Mezzanine level and it felt like we were almost on top of the stage. It was just Garth in jeans, a grey hoodie, baseball hat and his guitar. He was very conversational with the audience and basically took us through his lifetime of growing up through the 60s, 70s and 80s and which music influenced his own music. He played snippets of songs, and then played one of his songs that was influenced by that particular song or artist. Very cool and showed off his talent and he was funny too! His wife, Trisha Yearwood, came out at one point and they bantered and sang a few songs together. At the end, he of course did an encore and played my favorite, “The Dance” and the ultimate crowd pleaser, “Friends in Low Places.” I loved that before he sang the Dance, he said, “This is MY favorite Garth Brooks song.” We were soooooo glad we splurged and went, because most likely we would have lost the same amount of money at a table and not had this very cool experience. We headed back to Mandalay to meet the group. In bed a bit earlier tonight – 1am.

Shell and I at the Garth Brooks concert

Seahawks Sunday! The game was at 10am, so we all had to get rolling early. Mike and I checked out of Paris and drove down to Mandalay. We all had our gear on and ended up in a bar with some other Hawks fans. Bloody Mary’s and Beer and a great victory! Mike & Marc even won some money on the game. Mike & I drove the car back to the RV Park and got dressed for Shelly’s b-day dinner. We met the group back at Mandalay at the vodka bar, Red Square. Then we had a limo take us to Bellagio (about the same cost for two cabs and much more fun!). Marc L’s friend got us a reservation at Yellowtail with a table on the balcony overlooking the fountains. This place was amazing and probably one of the best views in Vegas! The restaurant was Japanese with a lot of fish and seafood, which is not typically what I would choose. It was family style where they brought out dish after dish and we all got a little sampling. I ate Ahi, duck, lobster, crab, sea bass, shrimp (also beef and pork). Very proud of myself for being so adventurous. For those of you who know me, this is way outside my comfort level. But, I said I would try everything and it was all delicious with great flavor and excellent presentation! The desserts were tasty too! This was the most expensive dinner I have ever had, but so worth it for the food, atmosphere, service and of course exceptional company! We all continued our evening across the street at Bally’s. At around midnight, Mike & I said our goodbyes and took a cab back to the RV Park.

We both slept in and it was great to be back in the MoHo. The others flew back to Seattle, but Mike and I had a few more days here. It was nice to be back in the comforts of “home” that’s for sure. We were very lazy in the morning, but decided in the afternoon to drive downtown to the Fremont area. We drove by the pawn shop from Pawn Stars and opted not to go in. We parked near Binions and had a famous Binions burger and walked Fremont Street. I had never been here before and it was a pretty cool experience. A completely different vibe from the strip; kind of reminded us of Reno. It was Veteran’s Day so the light show they had going on the ceiling was patriotic themed. There were a lot of people out which made the atmosphere pretty lively and fun. We drove back to the MoHo and were both in bed by 10. 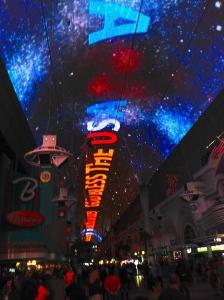 Last day in Vegas. The RV Park had a mobile washing service, so we decided on a much needed wash and wax! What a difference when professionals with the right equipment do it. We have tried to wash on our own a few times and it just hasn’t turned out very good. Mike washes the front windshield often, but doing the entire 40-foot beast is a much bigger task. We ran some errands, grocery shopped and did laundry. Decided to head out for our last night in town. Jeff Brauns recommended the M Resort (He was also here for the weekend, but we never had the chance to meet up.) This place was only about 5 miles from our RV Park so we thought we would check it out. We had a great happy hour dinner. Mike had caprese salad and shrimp cocktail and I had French onion soup and a chopped salad. The casino was absolutely dead but we sat down at a Pai Gow table and treaded water for awhile. I think the weekend finally caught up with us, as we were both exhausted so decided to call it a night. I got some Pistachio gelato on the way out and we hit the sack early.

All in all Vegas was a great trip even though we donated a bit to the cause.  It was nice to do some new and different things this trip.  Garth Brooks and Yellowtail were definitely the highlights for me.  Not to mention hanging out with good friends which we always love after being on the road just the two of us.  Next stop is Lake Havasu, AZ for a few nights of chillaxing before we hit Palm Desert, CA for 2 ½ weeks. I can’t believe that Thanksgiving is upon us. So excited to spend time with great friends and family — Cameron’s, Aldrich’s, Pflugrath’s, Bob Gom and my mom and brother! It will be so nice to be settled in one place for that long!