Lamoille Lake – the view we were rewarded with after our intense hike!

We decided to take a drive to the Humbolt National Forest today – golf course was hosting a tournament so we will play golf later this week if we can get on. I was looking through a travel book that Traci’s friend Kindra gave us for our trip and it had a scenic drive that was very close to our place here in Elko. We took off about noon, and headed up to the Lamoille Canyon Scenic Byway. This canyon is huge. It feels like Glacier National Park in Montana, only a bit smaller. They call it the Grand Canyon of Nevada. It is extremely deep, with walls that must be at least 3-4,000 feet around us, very impressive. We drove to the end of the canyon, about 12 miles, passing several lookouts and a campground along the way. (The Thomas Canyon Campground looked really nice with very private sites and water running through the entire campground…for future reference). 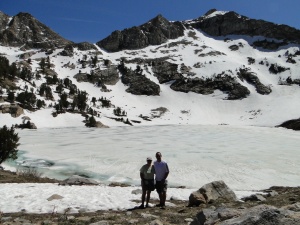 This is not our picture, but shows what the lake looks like after ice/snow melt

We got to the parking lot and I had planned for a hike; brought our shoes, some food, lots of water, backpack, etc. We looked at the legend and thought we would go up hill vs. down hill, towards what we thought was Dollar Lakes. There were a few other groups out there and we started following a family with several children and fishing poles.  There are supposedly some nice Brooke Trout in these lakes – and where is my fishing gear – back in the MoHo. We passed two other groups on the trail, and shortly after the second group, the trail seemed to be very poor at best, probably because it is still early in the season. We kept trudging on as I thought I could see something here and there that resembled a trail. We knew from the terrain that there had to be a small lake ahead up over this little ridge. The surroundings got thicker, and now it was clear we were not on the trail anymore. After a good 30 minutes of trying to relocate the trail, we stopped for a moment and used the binoculars to take a longer look around. We saw two other groups of hikers, one to the left across the creek, the other group way to the right up on the side of a hill. We decided to head towards that hill, and in about 20 minutes we finally found a trail again that those people were using, no more foraging through the brush and marshes. This trail was heading straight up, switchbacks and eventually into several ice/snow fields. Now the trail was hidden again, but at this point I was not going to just give up and Traci was game for the challenge. We came over a ridge and there it was, the lake we had been looking for, only it was 99% covered in ice still! Absolutely stunning and not another person around. We stopped for a snack and some pictures and then it was time to head back. (My back had been sore the last 45 minutes or so, not sure why? A-G-E)

We followed our trail back through the snow and relocated the trail we came up.  It was much easier to follow this very well defined trail back to the car. When we got to the parking lot, we saw that there was a sign for the horse trail that we must have missed when we arrived. We looked back at the legend on the map, and we clearly hiked to Lamoille Lake, up at almost the 9,740-foot level! Holy smokes – that is why we were so tired – there is some thin air up here. We got back to the car and had the celebratory cold beverage, and now my back was killing me! No Advil in the car, so just had to suffer back to the MoHo. Got home and the back is in full inflammation, time for some pizza, good drugs and cold beers before bedtime.

The mountain above Mike’s head feeds the lake that we hiked to. 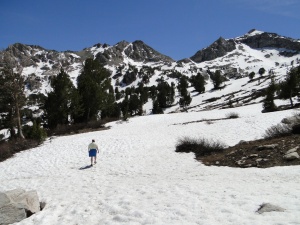 Traci hiking through the snow on the way to lake.