We left Jacksonville and did a bit of backtracking southbound to our next stop in Titusville, just NW of the Cape Canaveral area. We arrived at the Great Outdoors RV Nature and Golf Resort, checked in and set up in our site. This is a nice park, but it is way too huge for us. There are over 1,500 sites here, and there are a lot of different types of sites, many with permanent structures and mostly residents. There is an 18-hole golf course running through the property, and with that comes a ton of golf carts, so many that it is a constant noise and you have to watch out for these cruising seniors if you are out walking on the streets.  Again, we felt like the youngest ones there.

The big reason for our backtracking was to be in in the area for a rocket launch from Cape Canaveral. After we were set up, we headed to Port Canaveral, just south of the Kennedy Space Center. At 8:59PM a Delta IV rocket launched into the night to deliver a next generation GPS satellite to an altitude of some 11,000 miles! Although the wind was blowing, taking with it much of the sound, we felt the power of this massive giant heading into the stars, an awe inspiring event that we were super lucky to witness in person. I had looked into the launch schedule way ahead of time, and thus our reason for returning to the area to experience something I would have never thought possible.

Rocket prior to launch from our viewpoint 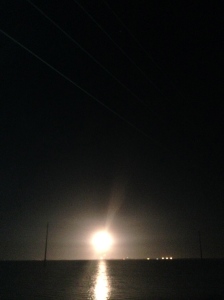 This is the rocket taking off. This is the best our camera could capture it.

The next day we headed back to the area, and visited the Kennedy Space Center. This is a massive 140,000-acre facility. It is designated a Natural Wildlife Refuge for the local animals; black bears, panthers, 21 Bald Eagle nests, turtle and tortoises, and some 5-6,000 alligators.  There is a lot of land here, but the main attraction is the launch pads used over the last 50-plus years for putting everything you can think of into space. We started our day at the visitors center, and toured the rocket park, an area that displays about a dozen different rockets from various times in history. Next, we headed out on a bus tour for about 90 minutes, passing by one of the massive rolling launch creepers that deliver the various rockets to the individual launch pads.  Next stop on the tour we headed to the Saturn 5 display. This is the largest rocket in NASA’s fleet of projectiles and it is so massive you can’t imagine that it could have flown into space. (Thanks KR for the recommendation). Returning to the main visitor’s center, we headed to the IMAX theater and got lucky enough to time it right to catch two great 3-D films, the International Space Station and the Hubble Space Telescope. (Very cool movies, especially in 3-D).  We left the movie theater and wandered over to the Atlantis display. This is where one of the remaining shuttles is displayed and you can realize the size of these vehicles, again awe struck with the size of what we sent into space some 137 times over a 30 year period. Ending our visit here we participated in the Shuttle Launch Simulator. You get to take a simulated ride, developed by the shuttle astronauts, on what an actual launch felt and sounded like. For those of us old folks that do not do a lot of amusement park rides, this was pretty cool. Some 6 hours later, we had finally finished our tour and headed home for dinner back in the MoHo and a relaxing evening.

Vehicle Assembly Building (VAB) – this is where they build ’em!  The stars on the flag are 6 feet across and the blue part of the flag is the size of an NBA basketball court. This gives you a feel for how big this building is!

One of the launch pads 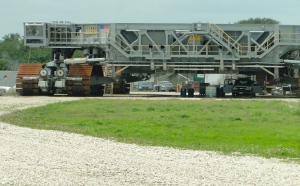 This thing transports the rockets from the VAB to the launch pad. Maxes out at 2mph. 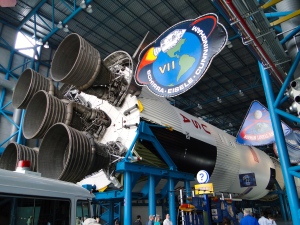 Saturn V up close & personal! Check out those thrusters!

Our last full day, we basically just hung out at the MoHo and caught up on the Olympics. The rain and thundershowers had returned and it was nice just to veg out in our home on the road and do absolutely nothing. Today we head to Hilton Head Island, SC for the next 9-10 days and hopefully some good golfing weather and courses.  We passed right by the Daytona Race Track hosting the Daytona 500 at 1pm EST.  Originally we were planning to go to this, but we decided against as it just didn’t fit into the schedule or budget.  In hindsight a good call because we would NOT want to have the MoHo there with the tornado warnings and severe weather in the region.  Maybe the next time around…

This is the Daytona Race Track exit at 9:30am (snapped from the moving MoHo). Just below the light post you can see the corner of the grandstands.