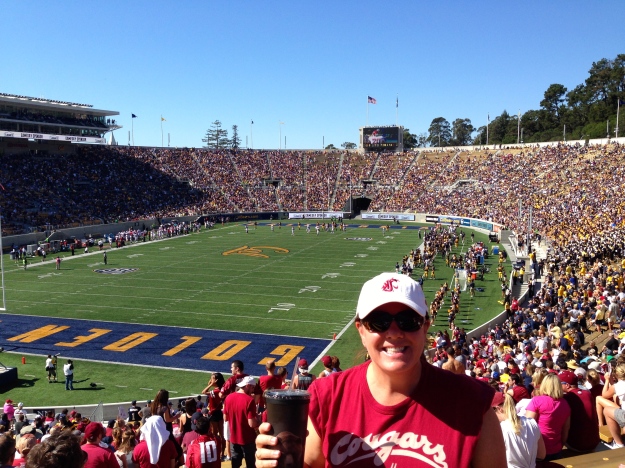 We left Yosemite disgusted with the Government closure of the park (and for that matter, all National Parks. What a shame for people who had planned their vacations and events who are not able to see these amazing places). We planned the drive out of the area a bit better than the drive in. We opted not to hook up the car and I drove separately from Mike in the MoHo. MUCH more pleasant for all! Our destination was San Jose and the Coyote Valley RV Park. We were now in the Bay Area and the prices reflected it! We got settled for the night and enjoyed a relaxing evening ‘at home’ in the MoHo.

The next morning the wind was howling, but we had a tee-time at the Coyote Creek Golf Course so we decided to go for it. We were paired up with another guy and ended up having a great time. It certainly wasn’t our best round, but the course was in great shape. We headed into the local town, Morgan Hill, for pizza that night.

Friday morning, I was in desperate need of a pedicure so we headed into town and found a local nail joint. Mike went to wash the car and I enjoyed my hour of bliss! Then it was off to Saratoga for the day our new friend Joanna planned for us (we met her and her husband in Lodi and they basically planned an entire afternoon/evening for us). First stop was Mountain Winery. We drove up a steep, windy hill to the winery and felt like we were on top of a mountain with amazing views of the valley. It was a gorgeous, sunny day so we opted for glasses of wine and a cheese plate. We walked over to the concert venue and were instantly jealous that we had never been here before. Bonnie Raitt/Marc Cohn were playing that weekend but it was sold out. We were determined to get tickets as this was a venue NOT to be missed (more later on this topic). We enjoyed another glass of wine, then decided it was time to head back into Saratoga. Next stop was ‘The Bank,’ a dive bar where we enjoyed an ice-cold BL. Then onto stop 2.5, ‘The Basin’ for a recommended Martini. Mike actually had a Moscow Mule and I opted for refreshing glass of sparkling wine. The menu here looked incredible, but we were determined to honor Joanna’s itinerary and hit La Fondue for dinner. This place was very similar to Melting Pot (our local Seattle fondue restaurant), but more upscale. We did the typical cheese, salad, meat and dessert courses. My fave was definitely dessert, but we both left feeling overly full. Good food, but definitely way too much of it! 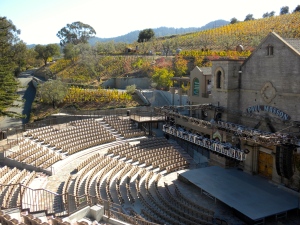 Today, was the day! The reason we came to the area. COLLEGE FOOTBALL! Mike had scoped this out months ago. Cougs were playing Cal in the day and the Huskies were playing Stanford in the evening. We were doing the double! We were up early and on BART to Berkeley on the 9am train. We met Mike’s aunt Melanie for breakfast and bloody mary’s and a quick visit. Then it was time to head onto campus and prefunc for the game. Surprisingly, it was hard to find a bar to get a beer in. We ended up in some random hotel, then found a Coug rally area where we got a cold beer. The game was a bit boring to be honest. Yes, the cougs won, but the turnout wasn’t great and the Cal fans were quiet! I’ll take the win though! Off, we went back to BART for the trip back to Fremont where our car was parked. It just so happened that there was also an Oakland A’s playoff game that night, so the train was packed with A’s fans. Kind of fun to feel the energy of these excited fans. We made it back to our car and headed to my very dear friends house, Renee Kaplan. We have known each other since middle school. She lives very near Palo Alto with her hubby Evan and darling sons, Jace and Penn. The game was very exciting and I must say those Husky fans definitely outshined the Coug fans. They had a HUGE presence at the game, which was very impressive. The energy at this game definitely kicked butt over my Coug game. Sad, but true. We also ran into good friends, Mike & Dawn Cameron, who were down from Seattle to cheer on the Dawgs. I was shocked at how close this game was and hard to admit that the UW Huskies are no joke. They actually could have won this game and it was too bad that it came down to an officiating call. A great game to watch! We headed back to Renee & Evan’s and said our goodbyes and back to the MoHo. A VERY long day, but so fun. We did it! 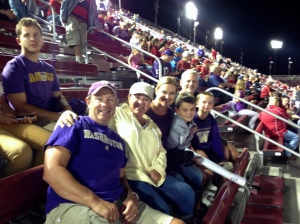 Miller’s and Kaplan’s at the UW/Stanford game

Needless to say, we slept in on Sunday after our 16-hour day! It felt great to relax and just hang out at the RV Park. We watched the Seahawks lose (boo!) and went to the grocery story. We got a new neighbor, PGA pro Charlie Beljan. He rolled in his mac-daddy MoHo for the Fry’s tournament just south of San Jose. We were watching the President’s Cup on the TV when he came over to talk with us, so it was very cool to find out he was in the PGA! We had a relaxing night on the MoHo and getting ready for our morning departure. We were going to try to get tickets to the Bonnie Raitt concert, but lost our steam after our busy day. But, I still believe this could be one of the best concert venues ever! It would be worth it to scope out next year’s concert calendar and fly down for a long weekend.

Our drive was an easy one. Only 90 minutes, which is a dream come true! This never happens so it was a pleasant surprise. We arrived in Monterey to the Monterey Fairgrounds by noon. This area was a challenge to find a place to stay, as there aren’t may options. So we felt fortunate to find a spot. However the airport was right next door (loud!) and the spots were not level at all, so our jacks had to lift the front end of the MoHo 6 inches off the ground. But, the location couldn’t have been better. We got settled and headed right out to the 17-mile drive. This is a drive along the Monterey Peninsula/Pebble Beach area. Talk about gorgeous scenery and amazing mansions. We did stop at Pebble Beach Golf Course for a light lunch at the Lodge overlooking the 18th green. This was so cool for us to be at such a recognized location that we have seen so many times on TV. Loved being here!  We checked out the pro shop and inquired what green fees are…$495!  We drove back to the Fairgrounds for the night. Wow, those planes were loud! 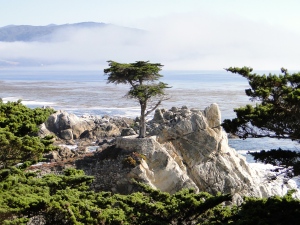 The Lone Cypress near Pebble Beach 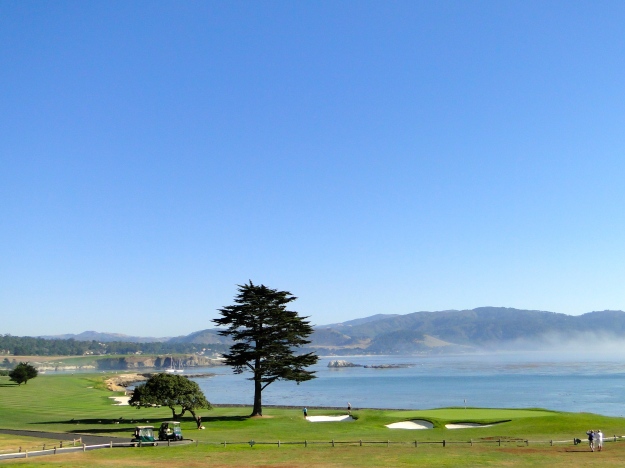 The next day it was off to the coast. We drove the 1 down to Big Sur. It was a pretty foggy day, so the scenery wasn’t perfect but pretty impressive. We drove as far as Nepenthe, a cool restaurant on the side of a cliff overlooking the amazing scenic coast. We drove back and stopped in Carmel (or Carmel by the Sea, the official name) and strolled through this quaint town. They were gearing up for their film & arts festival the next day, so I was hoping for some celebrity sightings, but no luck. I think there is some cash-ola in this town! We drove back to Monterey and decided to hit Cannery Row downtown. This is a vibrant, touristy area right on the waterfront. We walked and walked and decided on an early lunch at the Cannery Row Brewing Company. Then headed back into town for the local farmer’s market. We nabbed some blackberries, raspberries, lettuce and delicious caramel apple. We love to hit these local markets when we can!

Next stop is Paso Robles and more wine tasting! Yippee!