Yellowstone River and Waterfall – it looks like a painting!

We left Steamboat Springs and decided to just go for it and do the long drive all the way to Victor, ID instead of stopping for just one night in Rock Springs, WY as we had originally planned. The last bit of the drive from Jackson, WY to Victor is over another one of those fun passes (Teton Pass) we have gotten to know so well, and Traci hates every one of them! The MoHo has handled these high altitude/steep grade challenges like a charm, and I can’t say enough for the exhaust brake system. (The exhaust brake is a button I control and it basically downshifts the MoHo for me to keep my foot off the break. Awesome when you are trying to slow down 35,000+ lbs.) We stayed in Victor at the Teton Valley RV Park, mostly because Jackson was full. We arrived at about 5:15PM and there were 6-7 people there to greet us at the registration office. 5PM is the shift change for the park staff, and those leaving and the others not working decide to make it their own happy hour, what a welcoming committee!

Next day we headed to Jackson, also known as Jackson Hole. We had to drive back over Teton Pass, and I had to downshift the Acura to keep the brakes from overheating. Did some wandering in Jackson, and then did a nice little scenic drive from just south of the Grand Teton National Park to Jackson Hole village. The village was beautiful, looked like it would be a lot of fun in the winter. We stayed around to take a free Gondola ride and to have some early dinner up on the mountain, only to find out that it does not run on Saturdays, oops. Sunday we went back to Grand Teton NP for a hike and sightseeing. Took a short hike on a very quiet trail, so quiet that we decided to turn back as this is bear country and we just felt a bit nervous.  We hadn’t purchased any bear spray yet! We drove the rest of the way through the park; the Teton’s are absolutely stunning mountains! Some great wildlife and scenic pic’s (see the link above) and a nice overall day. We finished back at Victor with a brew at the Grand Teton Brewing Company, and I got to refill the 40 oz growler I got back in Denver. 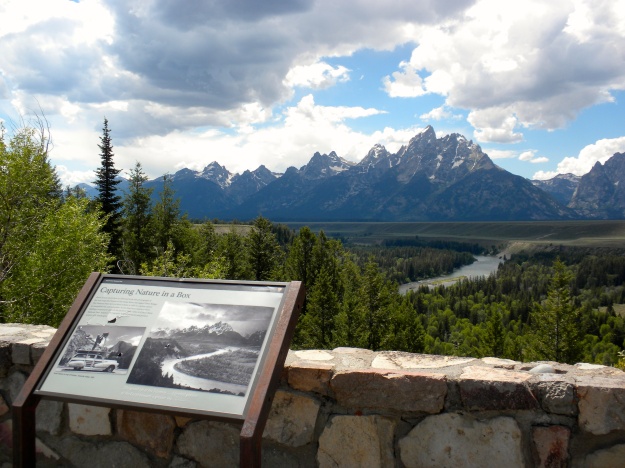 Ansel Adams took a pic of this amazing view of the Snake River & Tetons in 1942. I tried to capture the same shot – pretty impressive!

The next day was on to Yellowstone to meet up with my college roommate Eric and his family. We stayed at the Grizzly RV Park in West Yellowstone, a bit pricey, but nice big RV sites with grass, lots of room between RV’s and great access to the park. The first afternoon and night were quickly lost to being with friends, and a lot of vino was had by all…almost too much if that could ever happen. The next morning Traci and I headed in Yellowstone National Park about 11:15AM, a very late start and we paid dearly for it. There were three cow Elk inside the park about 12 miles from the entrance, but the backup was 7 miles long just to see them, worse than sitting in Seattle traffic! We finally got through that mess over an hour later and did a northern loop through the park.
Here is a short video of the elk that caused the traffic jam: MAH06810.

We headed up to Mammoth Hot Springs area, stopped a few times for wildlife and scenery. (Again see the pic’s attached in the photo stream, be sure to let them download completely to see the detail!) Mammoth was beautiful, but it was a bit wet that day, so we hurried through to keep the drive moving. Heading east, just past a road construction site, we saw the tell-tale signs of wildlife approaching. People just stop and halfway park their cars for a picture, regardless of the road, other drivers, etc.  It reminds me of the professional garage sale shoppers who just park in the middle of the street, really? This was an unusually busy area of cars so we decided to try and find a safe pull out. We got ½-mile beyond the main group and talked to a guy who said there was a grizzly bear back at the area everyone was stopped. We had to get parked closer, so we found a safe spot, and made the little trek out to the bluff where everyone was standing, listening to a Ranger talk about this particular bear. His name is Scarface, a 24-year old male whom the park-staff know well. He was way down in the canyon below, probably about ½-mile away, perfect distance for safe viewing. After leaving there we continued on and there again we came across another crazy bunch of people pulled over, this time someone said there was a bull moose nearby. This moose was lying down, taking his afternoon siesta, so the pic’s were challenging to see his rack in the woods/stumps, but still impressive. The rest of the day we just drove the loop and got back to the MoHo around 7PM for dinner and a lot less cocktails that night.

The next morning we were out of the MoHo by 7:00AM, not to get stuck in that same mess of cars again, and headed to Old Faithful for the approx. 8:30AM eruption. She came through like a charm at about 8:40AM, just as I remember when I was here as an 8 year old kid. We headed over to the General Store and I found a fly rod; pole, line and reel ready to go. (I used to fly fish, lost my gear in a move and never replaced it, now was the time!) We continued to see the sights of the southern loop, tons of bison in herds and on the road, very large animals that you can almost touch from your window, but I would not recommend it! Met back for dinner and drinks at the MoHo with the Overholt’s, and another late evening. I got up early the next morning, chomping at the bit to get out and use that new fly rod. Tried my luck on the Madison River on the west side of the park, but it had been awhile and my presentation and limited fly selection were not to the liking of any of the resident fish, oh well. We spent the day in West Yellowstone, shopping and tourist stuff. That afternoon, we took a cooler, chairs, and poles back to the Madison River for a relaxing afternoon of fishing and sunning, before coming back out of the park for a dinner at the Wild West Pizzeria – darn good pizza! Friday AM I was back on the river for awhile, again shut out but had a great time. We said goodbye to the Overholt’s and headed out about 11:00AM to our next stop, Pocatello, Idaho for a few nights before heading to Boise, and then Yakima for pool party! 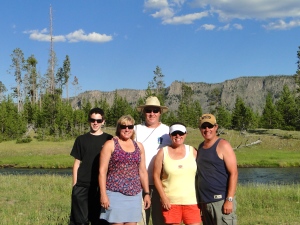 Overholt’s and Miller’s in Yellowstone NP

Note from Traci – this was my first visit to Yellowstone (at least that I remember) and I was so impressed by the diversity of the park.  It is the first established park in the national park system and it did not disappoint.   The wildlife was amazing – I saw more here than I have ever seen in Alaska.  The geyser’s everywhere were bizarre to me, but very cool.  Seeing Old Faithful was the most touristy thing we did, but one of those sites you just have to see!  Then there were lakes, rivers, waterfalls and mountains that were spectacular.  The number of people rolling into this park every day was staggering, but once inside the park, and cars branched out to different areas, it didn’t seem that crowded.  If you have never been, this is a must-visit on the bucket list!