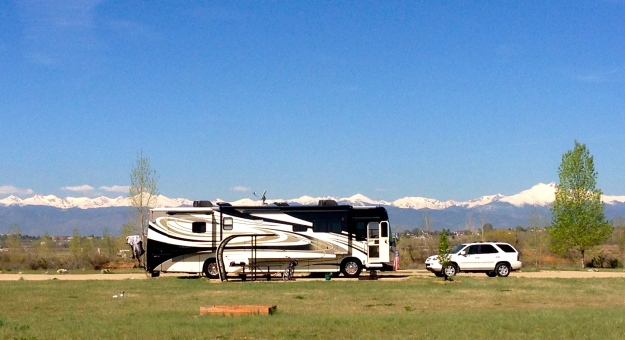 I really do love Colorado. We came through almost two years ago in June/July 2013, so were excited to be here again to see friends. However, Colorado in springtime is a bit of a different story than in the summer. It had snowed a few days before we arrived and for the first 4 days it was cold, rainy and stormy. With that came my first sickness of this entire 2-year trip, a bad head cold. Dang.

Our first destination was Golden, just west of Denver, and the Dakota Ridge RV Park.  We got settled in then made contact with my college friend, Ron, and hatched a plan to meet that evening at Mountain Toad Brewery in Golden. It was great to see him and his son Tyler (his wife was in Paris visiting her aunt) and catch up on the past few years over a few beers and a killer burger from the local food truck. The next day I was down for the count with my cold, but rallied that evening. No choice! Ron picked us up on his way home from work and took us to his house, just up the hill from where we were staying. He actually had snow on the ground up there! We then drove back into downtown Denver, parked at his office, and started our evening. First stop was Union Station, a functioning train station that has been renovated as a very cool, hip, bar. Loved the concept! Next, we hit Machete for gourmet tacos, then ended up at the rooftop bar of the Viewhouse. There was a Rockies game going on and we actually had a view of the stadium from the bar. As always, had a blast with Webert and loved being back in a bigger city! 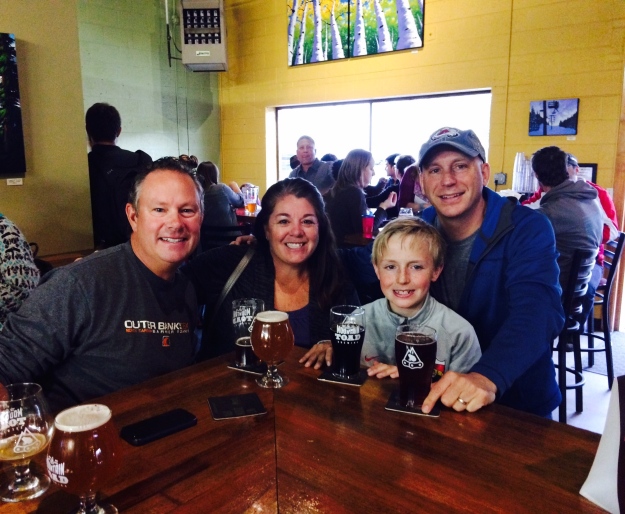 Mike and I, Ron and Tyler at Mountain Toad Brewery 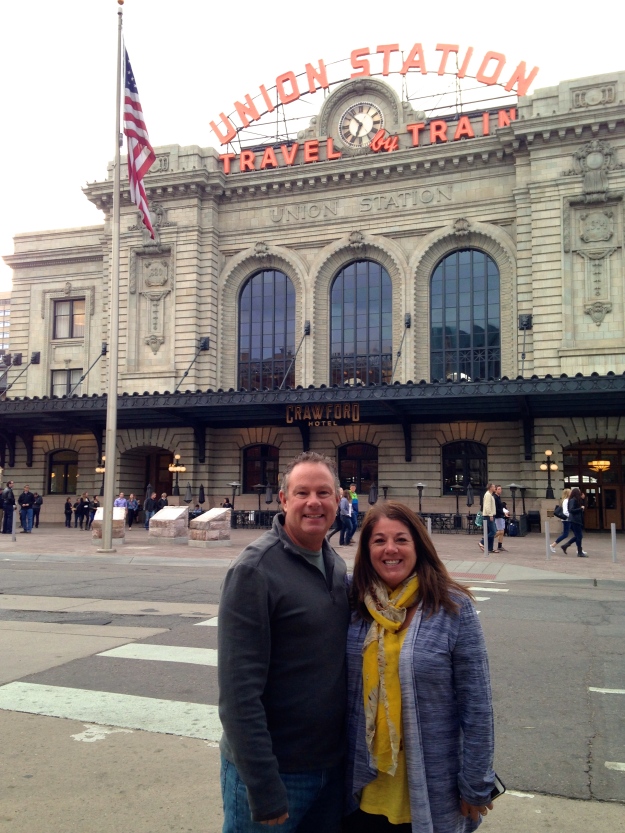 Inside Union Station at the Bar

Ron and I at the Viewhouse Bar

The next day we had plans to meet up with other friends, Lori & Bill. Lori is a sorority sister from WSU. They were staying in Boulder for the night, so we headed up to meet them. We got there early and walked around Pearl Street, then met them at their hotel bar. We hit a few spots for cocktails, then had a delicious Italian dinner at Pasta Jay’s. It was prom night in the area, so was fun to see all of the kids dressed up for their big night. My cold had really kicked in, so we said our goodbyes and headed back to the park. I love that no matter how much time passes, we can just pick back up where we left off. Bummer that we didn’t get to see their darling girls on this trip.

Mike and I, Lori and Bill at the Rio Grande Rooftop, Boulder

We woke up Sunday to horrible weather, a good day to just bundle up and hunker down and try to beat this cold. Ron called to check in with us and we ended up meeting him and Tyler for lunch at a place right up the street, then they came back to the MoHo to watch some hockey. They headed home and we stayed in the rest of the day checking items off our to-do list! Interesting to note that we haven’t turned the a/c on since Florida and have had the heat on most of the time.

Our Campground in Golden, socked in (usually the mountain are in view)

Monday was moving day for us. We headed north about an hour to St. Vrain State Park in Longmont north of Denver. This park was the complete opposite of where we had just been. From an expensive, crowded, city-like park to a wide-open spread out retreat surrounded by lakes. Since we had a short drive, we were up there by noon all set-up.   This park was close to our friends, Jen and Rod, who live in Broomfield. Jen is a great friend I used to work with at Holland America. We had plans for dinner at their house that night and were looking forward to seeing them and their kids Jordan and Bella, plus new baby Katalina! It was nice to just hang out at their beautiful home, catch up over a home-cooked meal! We didn’t stay late as this was a school/work night for them.

Woke up the next morning to sunny, clear skies and a view of the Rocky Mountains that was amazing. Finally! Feeling better already. I went for a much-need haircut/color from Jen’s friend and Mike fished all day on the lake. All is right in the world! Met Jen & Rod at nearby Echo Brewery in Erie for beer and pizza that night, then said goodbye to them. Time just goes by so quickly!

Mike and I, Jen and Rod at Echo Brewery

The next morning was another glorious sunny one and we decided to drive north to Ft. Collins for the day and check out some more breweries. A theme is forming. Colorado is the Napa Valley of Breweries. More here than we could possibly visit. We stopped at Anheuser-Busch and were lucky that the Clydesdales were home. A very nice facility and biergarten. Next stop was New Belgium, which had a great outdoor setup. Lastly was Coppersmith Brewery & Pub for lunch on the patio in downtown Ft. Collins, which is kind of a hippie college town. Good people watching. We headed back to the MoHo and enjoyed a fire outside and a killer sunset. Now, this is the Colorado I had hoped for! 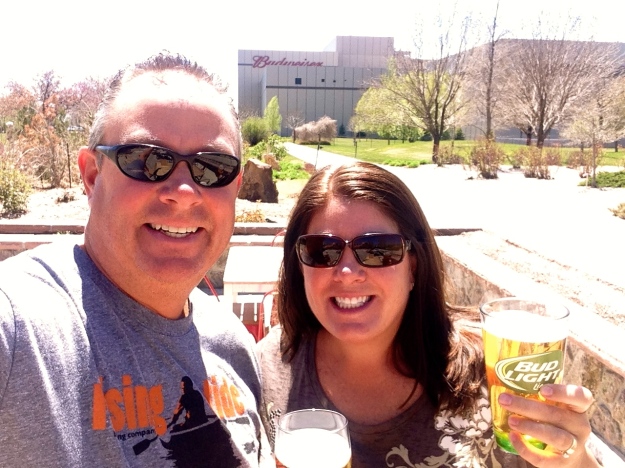 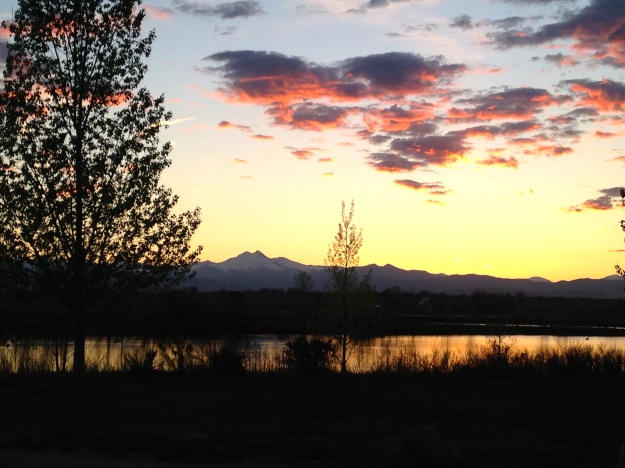 Sunset from our spot at the campground

On our last day we headed back toward Golden, right by our old RV Park to Red Rocks Amphitheatre. We had hoped to visit when we were actually staying in Golden, but the weather was so horrible, it wouldn’t have been worth it. But, today the sun was shining, so it was a perfect day to check out this unique concert venue. During the day, it is used by many as a workout venue; pretty impressive to see people bounding up the steps. We walked around leisurely and enjoyed the amazing views, picturing what a great place this would be to see a concert. In the visitor center we learned that the venue is the largest attended amphitheater in the world. It is a relatively small venue, but their season is much busier and longer than say the Gorge in Washington. We decided to head into Denver to check out a few more breweries. We drove-thru the Denver Broncos stadium lot with our Seahawks magnets on the car, then off to the Brewery Trail. We hit three of the top-ten list that I had – Strange Craft, Renegade then Wit’s End. The last one is owned by the cousin of my good friend Joe, so it was fun to visit it again (we had been 2 years ago). Ron actually came out and met us there, then he bought us dinner at one of his favorite pizza joints, Pasquini’s. It was a great day with the sun shining, but by the time we left dinner, the stormy weather was rolling back in.

Red Rocks Amphitheatre (if you look closely, you can see downtown Denver in the distance) 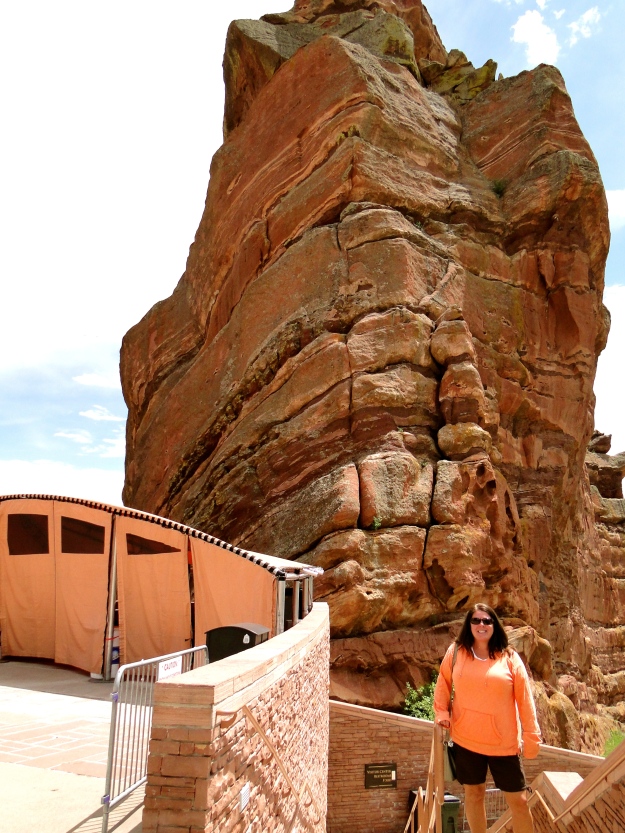 This map shows how many breweries are in the Denver area – wowza!

We actually tried to extend longer at our park, but it was full up for the weekend. Denver really is a great city and one I could see myself living in. But, it was time for us to keep moving and continue our trek north. After researching Wyoming, we felt like there really wasn’t much to see up the center of the state. We had already hit Jackson Hole, Grand Teton and Yellowstone the last time we were through. So, we drove most of the state in one day and it was beautiful country but pretty desolate. Wyoming is the 9th largest state by land area, but 50th for population (563,000). I think we saw more Pronghorns than people. Our 2-night stop in Buffalo, WY was a good one where we mostly relaxed. We checked out the small town, watched the Kentucky Derby and caught up on laundry. Sometimes you need these types of stops.

Next up we have Montana then yes, back in Washington. We are actually starting the process of looking for a place to live and it probably is time to get the resume refreshed. I don’t feel ready for reality yet, but I guess it is time. Anyone out there hiring?

Signs we are getting closer to home: