The MoHo all set up in Ft. Myers Beach

Hello folks, sorry it has been awhile since our last post. We spent a couple days in Gainesville, with the idea of going to the Florida vs. Eastern Kentucky football game that weekend. But Mother Nature chose otherwise, as it was cool and rainy so we stayed in and relaxed watching football at home. The game was a blowout as was expected, so it was a good thing we kept dry and warm. Definitely a college town, we drove all around the area and did not find a lot of other things to do or see, just a stop over on our way south I suppose.

Our next destination was the Orlando area. We found a park on the SE side of town, the Orlando SE/ Lake Whippoorwill KOA. Again the weather here was poor at best, lots of wind, and plenty of showers, so we did not do a lot. We spent a day driving out to the theme park area, but at close to $100 per ticket per day plus parking, we just did not feel like going into any of them, just not our cup to tea. I was surprised at how spread out the area was. Orlando is a big city with tons of tolls, you can’t go anywhere without paying a couple bucks just to drive on the freeways, certainly an expensive town to live in.

Our spot at the KOA in Orlando

Next, it was south to Tampa, and a Thanksgiving spent with Bill and Emily Lee. We had stopped in and spent time with them last year, closer to Christmas, so this time it was the other major holiday. They made all the fixings for the Turkey day celebration, and even enough for some to take home. It was great visit spending the day talking and watching football, especially the Seahawks demolition of the 49ers! So glad to make this a destination on the trip south and we may even see them on the way back up in the springtime.

Our next stop was a return to Ft Myers Beach. We had found this place last year, Gulf Waters RV Resort, but only had time for a quick two-night stay. This time we booked a week, and we were so glad as it was one of the nicest parks we had stayed at.  The park sites are for sale, so it allows the owners to do major modifications to each site. We loved walking the park and looking at all the different ways people had staged their sites; many with brick pavers, others with built-in BBQ’s or fire pits, a very cool setting. The other great part of this stay was the beach. We were only 3.5 miles to the beach, close enough to get there when we wanted, far enough we did not have to deal with the traffic. It can be tough to get there on the weekends, as the two lane bridge gets backed up, so we tried to go in on the off hours.

During our stay it was the final weekend of the American Sandcastle Building Championships. These folks can do wonders with a couple of tools, some Elmer’s glue and a lot of sand. Fun to walk around and see what people had created, and re-done, as the weather ruined about half of the projects during the week and the artists had to rebuild many of their works.

Another day I spent fishing. I have gone deep-sea fishing, done a lot of shore fishing, but never been out on a party boat. I chose the Sea Trek, with several others to choose from, it just seemed like a decent boat. The half-day of fishing was really a full day, with departure set at 9:30AM and returning to the dock at 4:00PM. The trip out to the fishing grounds took about 2:15, so we did not get a pole in the water till just after 11:30AM. Fortunately for me the boat was only about 1/3 full, so the mate John was not overloaded with customers. Each person was given a pole and a spot on the rail, with a bucket of cut squid for bait. Within a few seconds, someone on board was bringing in the first fish and it was wild to see just how many fish were caught so quickly. Over the next couple hours, the captain moved the boat a couple times when the fishing slowed, trying to get us to a better spot. I did catch one larger fish, a Triggerfish, but it was not in season so it had to be returned to the ocean. At about 2:00PM, the captain had the anchor pulled up, and we headed back to the marina. Fun to be out on the water for the day, and now I can say I have experienced this type of fishing. I probably don’t need to go again, but great for those not used to fishing, or for a big group or family. Also, the cost was fairly reasonable at $70 for the day. I brought home about 7-8 Grunts, and John filleted them for me at the dock, and then it was on to the MoHo for dinner. A simple white fish, not a lot of heavy taste, quite good for dinner. (No, Traci did not have any, as many of you know she is not a seafood fan.)

My catch for the day!

Another day we made the drive north to the Sanibel and Captiva areas. These little islands are what I would consider barrier islands, long and narrow, protecting the mainland from the ocean, or in this case the Gulf of Mexico. There was a main highway that runs through the center of the islands, and in some of the more narrow places, you get to see the massive homes that the wealthy have built here, and the landscaping to match. Very relaxed area, with great views everywhere. We drove all the way to the northern most point we could access (restricted for resort guests beyond the public road). We stopped at a deli, grabbed some sandwiches, and headed back to the beach for some sun and fishing. But the rain showers arrived just as we got set up on the beach, so our picnic was cut short, but still a fun day for sure.

Captiva Island right before the rain started, a great spot.

It was great to return to a place we had already been for a longer visit. We are now just arriving in Naples, staying at the very nice Naples Motorcoach Resort. Here we hope to have some more pool and beach time and possibly get in some golf and more fishing. Then onto another one of our favorite places from last year, Everglades Isle, for a couple weeks before we go onto Key Largo for most of Jan. and Feb. We are so glad we chose to stay south for another winter season, not missing the cold snowy rain at home in the NW, just our friends and family! 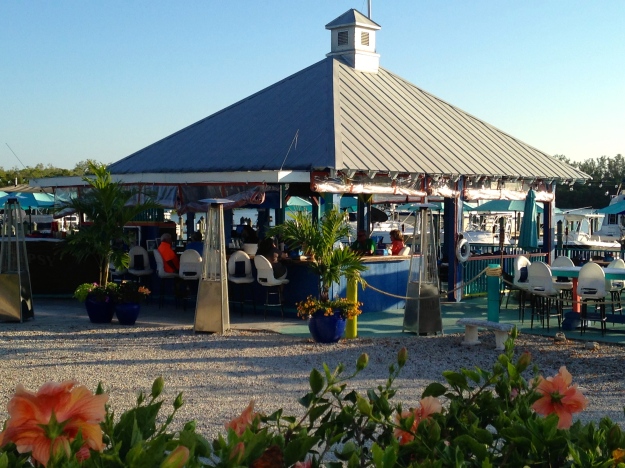 A great bar we found on the Isle of Capri, out toward Marco Island.

1 thought on “Central and Western Florida”