Memphis, TN was our next destination and the long drive down from St. Louis went smoothly, we arrived at Tom Sawyer’s RV Park by mid afternoon. The park was actually across the Mississippi River from Memphis in West Memphis, Arkansas so officially we were in our final state! (Alaska & Hawaii don’t count). We have successfully driven and stayed in every state in the lower 48! Something we weren’t sure that we would actually accomplish, but pretty excited that we have done it! This park was pretty unique in that it was located across a levee right on the banks of the river with nonstop barge traffic going up and down the river in front of us. These barges were huge some of them 4 across and 7 long and that river was flowing! We really enjoyed the park and they were so friendly and laid back. I guess they have to be because the campground actually floods every year, but in the springtime, so we had nothing to worry about. We ended up staying for a full week with a nice mix of relaxation, sightseeing and getting chores done. 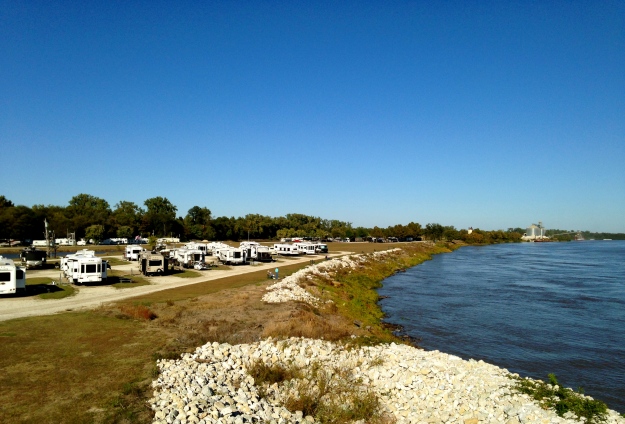 First on the agenda was taking care of some MoHo maintenance. On the morning we left St. Louis, we noticed one of the “basement” compartments was wet. So upon arrival in Memphis, we took everything out from underneath and Mike was able to diagnose that our water pump was broken. Luckily, there was a nearby Camping World and we were able to get an appointment for Wed. morning. This gave us a chance to clean and reorganize the storage area, which I loved. The bad part was that we had to pack up/unhook the house in the middle of our stay and drive to the appointment about an hour away in northern Mississippi. Everything went smoothly and we were back to the campground and re-setup by mid afternoon. Just one of the hurdles of being on the road and honestly we have been pretty fortunate with these types of issues, nothing major (knock on wood!).

Now, onto sightseeing. We are not huge Elvis fans, but we just had to go to Graceland. There were multiple packages to choose from, but we opted for a basic one and it was still $34 each, a bit pricey in my opinion. We were given ipads to use, loaded with a narrated tour and additional photos and factoids and of course Elvis music. The mansion was actually much smaller than I would have thought, but back in the day I’m sure it was pretty extravagant. It was a bit crowded but we were able to see everything we needed. The rest of the tour (archives, shops, costumes, cars) were nothing special and we could have done without, but I guess if you are a huge Elvis fan, you would really want to do everything you could. As it was, we were there about 2 ½ hrs. I enjoyed touring the house and listening and learning about Elvis and his life and glad we did go. I may have to download some Elvis tunes! 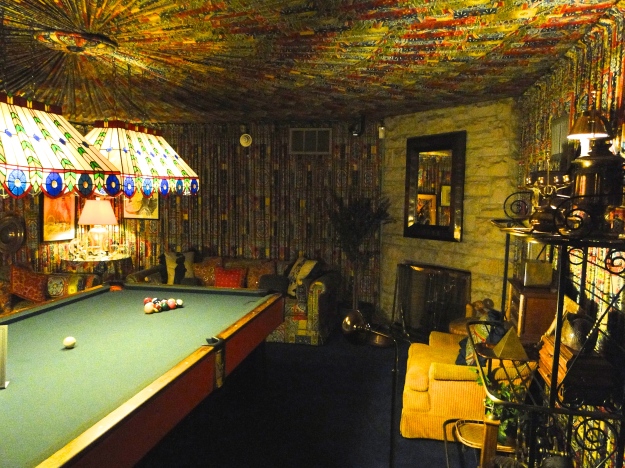 Some of his costumes

All of his Gold Records 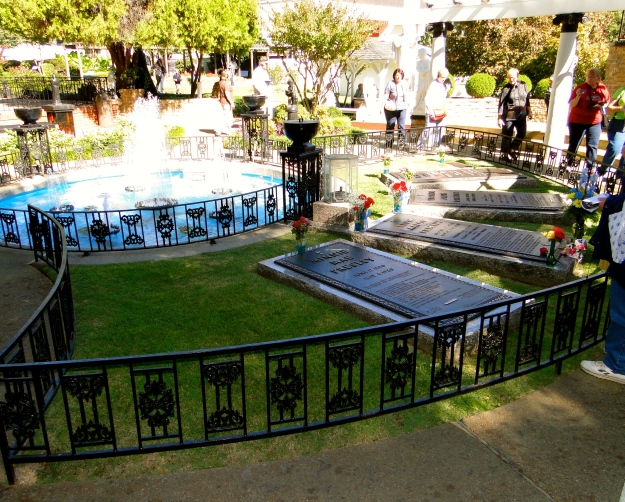 He is buried there along with family members

Another stop we made was at St. Jude Children’s Research Hospital. I have nothing but respect for St. Jude and what they stand for. I was here years ago to support good friends who were here under difficult circumstances and I wanted Mike to see it. We didn’t go inside the hospital, but did some shopping at the gift store and I really wanted to show Mike the Danny Thomas Pavilion, which commemorates the history and mission of St. Jude. Sadly, it was closed for a private event though.

Another day, we hit one of the many famous BBQ joints for lunch.   Mike had done some research and landed on Leonard’s Pit BBQ, open since 1922. He had ribs and I had a pulled pork sandwich.   This place was different than other BBQ places we have been to, as it was a sit-down vs. order at the counter. Mike said his was a solid 8. He is still looking for a place that lives up to Oklahoma Joe’s in Kansas City. Afterwards, we ended up in Midtown, a hip area with fun shops, restaurants and bars. We bellied up at Bosco’s for a local craft beer. On the way back to the campground, we stopped at Wiseacre Brewing, the only brewery we could find in town. It was a sunny, Friday afternoon and it was pretty crowded with people hanging out on the patio and getting a start on their weekend. This has become pretty standard for us, looking for local breweries to try out.

On our last Saturday morning, we hit the local Farmer’s Market. It was a perfect sunny morning with a lot of people out and about. Then, we headed into town and the iconic Peabody Hotel. We got our spot on the Mezzanine level to watch the famous “Duck March,” a tradition since 1933. Read more about it here. The ducks are housed in a “palace” on the roof and at 11am every morning they are brought down and led along the red carpet into the fountain in the middle of the lobby. They are trained to stay there all day, then the ceremony is reversed at 5pm. The place was absolutely packed which just blew me away. It was a bit cheesy, but also a pretty ingenious marketing ploy, bringing people in from all over to drink and eat. It worked on us!   After the ceremony we took the elevator up to the rooftop to see the duck palace and take in some great views, then to the bar for a Bloody Mary and beer. Afterwards, we walked around town and Beale Street, which is kind of like a mini Bourbon Street. It is a 3 to 4 block pedestrian-only area lined with bars featuring live music that spills out into the street. We were only there during the day a few times, so never really experienced the full nighttime vibe, but it seemed like a really fun area.
Sidebar: I had my Coug shirt on and a man who was working the door at one of the bars stopped me and jokingly said, “What do you know about the Cougs?” I told him I was from Seattle and went to school there and he said that Michael Bumpus was his nephew and that he was in Pullman for an Apple Cup long ago. Gotta love Coug fans!

The Duck March at the Peabody. The guy in red is the “Duck Master”

Much of our time in Memphis (or West Memphis) was spent at the RV Park, just relaxing and enjoying the beautiful sunny weather. We rode our bikes along the paths, BBQ’d a lot and had campfires.   Mike really enjoyed all of the barge traffic and just being right on the river. It was a great setting and one of our top five parks so far. And, they had free laundry – bonus!

Campfire at the park with view of the Mississippi River 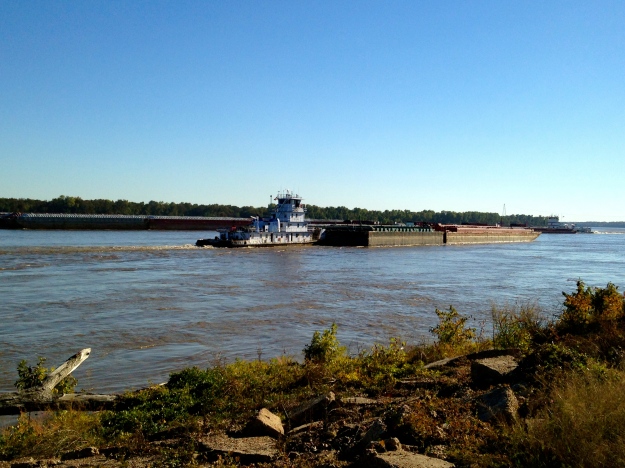 Some of the barge traffic on the river (huge one going down; smaller one going up in foreground)

Riding Bikes at the Park

We left the park on a Monday morning (after the Seahawks squeaked by a win the day before!) and drove due west to Little Rock, AR. We decided to stay at a true campground (rather than commercialized RV Park) where it was first come, first serve on spots. Since it was a Monday and off-season, we didn’t think there would be an issue.   We pulled into Willow Beach Park and had our pick of spots. This was a very nice campground right on the Arkansas River with spacious sites and plenty of trees. For us, this translates as “no satellite” which we typically shy away from. But, for just two nights, we figured we could survive! It was a beautiful day, but a big storm was due to roll in the next morning, so we decided we better get out and explore. A drive through Little Rock didn’t peak much interest for us, but we did stop at the capitol building for a few pics. Although it is the largest city in the state, it seemed quite small and pretty quiet, maybe chalk it up to a Monday afternoon. We opted to hit the grocery store and come back to the pretty setting of the campground and cook dinner and enjoy the evening at home. By 5am the next morning, the predicted rain had arrived and it was a nice day to watch movies and catch up on some computer stuff. Next stop is Jackson, Mississippi. 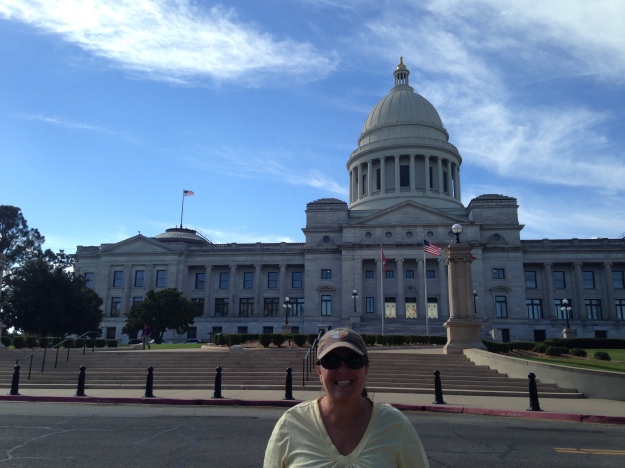 This is the point in our journey that we were planning to turn right and start making our way back home to the Pacific Northwest. But, after much discussion and some friends asking us why we would want to come home to the wet and gray winter, we decided to turn left. We’ll be making our way to Florida and plan to spend the last half of November through the end of February in the sunshine to cap off this amazing experience. At that point we’ll start to make our way back home, hoping to be there in April/May. It will be 2 years on the road at that point and time to figure out our next chapter.