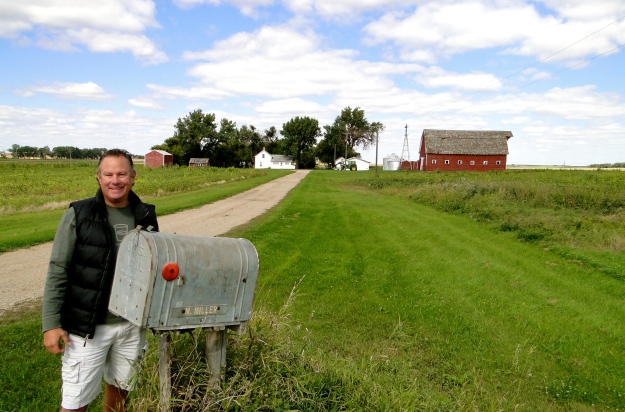 We headed west out of Duluth, our next destination would be Fargo, ND. The drive started out nice, a bit windy, but then a huge rain squall hit right before we arrived in Casselton, about 20 miles west of Fargo. We stayed at the Days Inn and Governors Conference Center and the park was nothing to get excited about, basic dirt and grass parking lot, just off the I-94. Lots of transient workers here, with pickup trucks coming and going all the time. As you may be aware of, North Dakota has a booming economy with the oil drilling going on, mostly in the northern half of the state. The boom trickles down to the rest of the state providing infrastructure and jobs for everyone. As it was a Tuesday, it was Taco night in the MoHo, and we hunkered down inside and tried to relax with the wind howling all night long.

The original Wood Chipper from the movie Fargo

Wednesday the weather was not much better, still very cold, temps in the mid 40’s, and still quite windy. A definite shock to the system, as we just left the mid-70’s in Duluth. We bundled up for a day in Fargo, jeans and heavy vests to ward off the coolness. The first stop was the Visitor Center; Traci was really looking forward to seeing “The Wood Chipper” from the movie Fargo. The movie prop is in the Visitors Center, there for all to see. The staff admitted that about 50% of the people coming in are just looking for the prop. After getting our pictures, we headed into the downtown area, specifically Broadway Street, looking for some lunch. The day was drying out, but the wind was still there and temps had risen to about 50, still darn cold. We stopped at a bike shop for some parts, and they recommended a great place for lunch, Rhombus Guys Pizza. On our way back to the car after eating, we had finally clued in that Fargo was going to host ESPN’s College Football Gameday the upcoming weekend, and we could possibly attend if we stayed a few extra days. (We chose not to stay, we felt like the extra couple days may affect us getting through the rest of the Plains states with the weather quickly changing – The Black Hills just got 20” of snow, a destination just a few days away!) We returned to the MoHo, after stopping for some supplies, and again hunkered down, wind still blowing and the temps back down to the low 40’s. We actually had to turn on the heat for the first time since I don’t know when!

Thursday we left Fargo, and made the 190-mile drive west to Bismarck, staying at the Bismarck KOA on the NE side of town. We got set up and decided to head into town, as this was to be a two day stop so we wanted to take advantage of the short time we had here. After driving around for about an hour, and not really finding a whole lot of excitement, we returned to the MoHo and had leftovers and got an early nights rest. 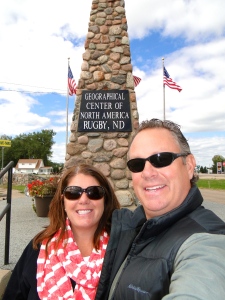 North Dakota is the leading state for sunflower oil production.  There were fields upon fields of yellow.

Friday we were up and out early, leaving the MoHo by about 9:30AM. We filled up the car, and started our drive North. Our big reason for this stop was to make our way to Knox, ND. Knox was the town that my father’s side of the family settled in back in the early 1900’s and the family still has the farm there. I had visited it once, back in the mid 1970’s with my brother and grandparents on one of those epic road trips when you are a kid. I have talked fondly of that trip and it was on the top of my list of destinations on our journey. The drive was about 160 miles up from Bismarck, and it took us through a lot of long straight roads, with lots of little ponds and lakes everywhere with fields and farming mixed in. Very peaceful part of our country and not a lot of people, just a lot of wide-open spaces. We first stopped in Rugby, and found a little greasy spoon for a good old-fashioned roadside lunch. The food was good, and it was clear we were not from around there, everyone seemed to know each other, small town America. We then headed east for the last 13 miles to Knox. I had done some research on the town, and it was now featured on a local website of Ghost Towns of North Dakota, as most everyone had left. At one time there were over 300 people living there, now it is down to 12. I drove straight to the farmhouse I had visited some 35+ years ago, and it looked just as I remembered! My Great Aunt Maggie was the last member of the family to reside here, and she had moved out about 3 years prior. The farmhouse and property have been maintained by some of the distant cousins, there were originally 15 children raised here by my great grandparents, what a feat! I knocked on the door, and soon realized the place was vacant. Peering in through the windows, it still had the same charm I remembered, just no furniture or people living there anymore. Traci and I walked all around the yard, taking pictures and exploring the property I had fond memories of. We then drove the empty streets of Knox, stopping for pictures here and there, but it was very quiet. We were looking for the cemetery, but could not find it. We turned down another street and I noticed a car was now parked that had not been there a few moments prior, and there was a man working in a garden. We stopped and I introduced myself, and he finally realized I was not there to try and buy some cheap housing, I guess everyone is trying to buy up properties hoping the oil boom will make for some quick bucks in the real estate market. He took us into a cabin he had across the street and gave us a lot of interesting opinions on the area and the world, quite a talker. We left after an hour or so, with a full bag of fresh tomatoes, and headed in the correct direction of the cemetery. Buried there are my great grandparents Michael and Katherine Miller, grandparents Michael and Hazel Miler, and Aunt Maggie. A special little town, one that I will never forget, even if it has all but been abandoned. We made our way back to Bismarck, returning on a different set of roads, but still the same peaceful ponds, lakes and fields, a very good day to say the least! Next we head to Rapid City, SD, a long 325-mile drive. 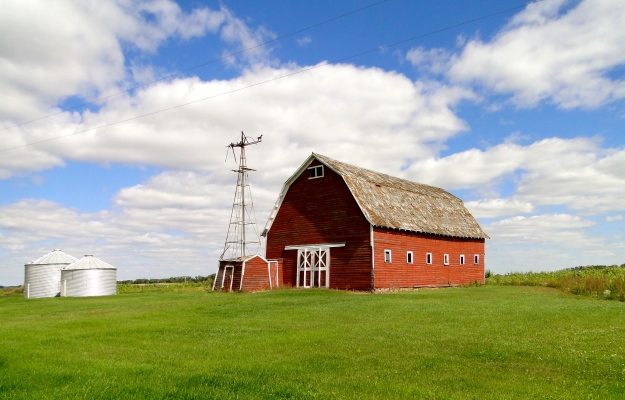 The big Red Barn at the Miller Farm

Miller Farm with downtown Knox in the background

Hard to believe 15 kids were raised in this house

Loved the “M” on the screen door

Click HERE for more pictures of the Miller Family Farm