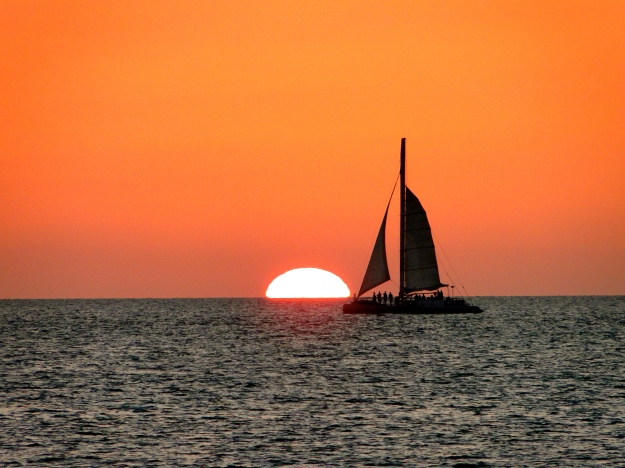 We have been in Key West for a week now, halfway through our stay here.  This is part of the trip that we had planned quite some time ago and Mike spent a lot of time researching where to stay.  We landed on Boyd’s RV Resort because it was the closest to the town of Key West and we were able to get a spot on the water.   Upon arrival, we were very disappointed.  This place was a zoo, absolute chaos.  The first spot they gave us, we couldn’t fit into.  And, it wasn’t on the water.  After talking with the office and going back and forth for about an hour, we got settled into a spot that would do, but still not on the water as we had expected.  Disappointed to say the least, but they were able to find a water spot we could move into on the 14th.   I think we have been spoiled with our last few parks, because this place just did not measure up.  Crowded, extremely tight spots (we can’t even extend our awning), not paved and very noisy.  We would not recommend this park.  In fact, we tried calling around to see if we could fine another park, but everywhere was full.  Stay tuned for an update when we move to our new spot.  I am trying not to dwell, but that is not in my nature.  Mike of course is doing better with it than me. 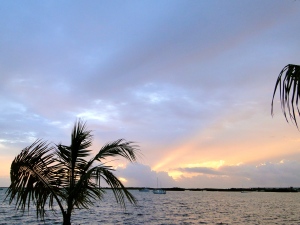 Ok, so now that my rant about Boyd’s is out of the way, let’s focus on the fact that we are in Key West!  This place is like no other.  Blue, blue water and everyone is in full vacation mode.  A relaxed, party atmosphere to say the least.   Our first full day here, we decided to head into Key West to see what it was all about.  The RV Park is at Milepost 5 and town is Milepost 0, so we are fairly close (the best thing about our park – location).  There were 2 cruise ships in town, so it was busy and crowded.  We parked and the first experience we had was seeing Guy Fieri roll down Duval Street in his red Camaro filming for Diners, Drive-Ins and Dives.  He stopped at a light right in front of us.  For those of you who know me well, I LOVE celebrity sightings!  We then stopped in at Sloppy Joes (famous spot that Hemingway used to frequent) for a beer that turned into three.  There was a live band playing, we met a couple of fellow RVers and ended up chatting with them for awhile.  Left there and walked by a place on the street, the Smallest Bar, which really was the smallest bar.  Mike could touch both sides of it with outstretched hands.  There was a young couple there who we hit it off with, Joe & Kate from Toronto.  A few more drinks and Fireball shots and that’s all she wrote.  We ended up bar hopping with them the rest of the night and having dinner at Margaritaville.   By the way, they have the same concept of “to go” beverages that New Orleans had.  Needless to say, we did up Key West right on our first night in town. 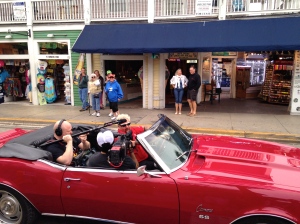 The rest of our time so far hasn’t been quite as crazy.  We had to get that first night out of our system before we could hit a more mellow and relaxed mode.  We have been back into Key West twice.  Once on Seahawks Football Saturday for brunch at Blue Heaven (highly recommended to us from Craig Gambino and it did not disappoint – banana pancakes)!  We walked up and down Duval Street, then decided we wanted to watch the game from the comfort of the MoHo so we could utilize the DVR function if needed.  It got a little interesting, but we came away with a victory!!!!  Another day we went into town in the late afternoon for an early dinner at Fogerty’s, then to Mallory Square for the sunset celebration.  The square is located on the south end of Duval Street and faces to the west.  We were there on a Sunday night and the place was packed.  Street performers everywhere.   At about 5:55pm, we watched the sun disappear into the ocean and everyone cheered (see main photo at the top of this post).  If you’ve never seen this phenomenon, it certainly is an incredible sight.  This is a nightly celebration and I’m sure is crowded every night.  There were also tons of boats out in the water, so we may look into a sunset cruise for another night to experience the sunset celebration another way.

We have also had a chance to use the kayaks!  One day we took them out right from the RV Park, which definitely was convenient.  The wind kind of kicked up on us though, so made for a good workout on the arms to get back.  But, being out on the water is just hard to beat.  Another day, we drove back up Highway 1 about 5 miles to Geiger Key.  The weather was perfect and the water was oh so blue.  It was so clear and varied among 3 or 4 shades of blue and green.  It is also so shallow in places; even hundreds of yards from shore, we could get out and stand in just 2 feet of water.  We saw a turtle swimming and tons of huge birds.  Mike fished and got a few nibbles but nothing to reel in.  On the way back to the take out spot, I had a manatee surface right next to me and it scared the doo doo out of me.  This thing was huge and I thought it might tip me over.   Possibly an over-reaction as they guys are apparently gentle giants and probably more scared of me, but it just really startled me.  After we got back on shore, we continued to watch this guy surface, which was very cool to see! 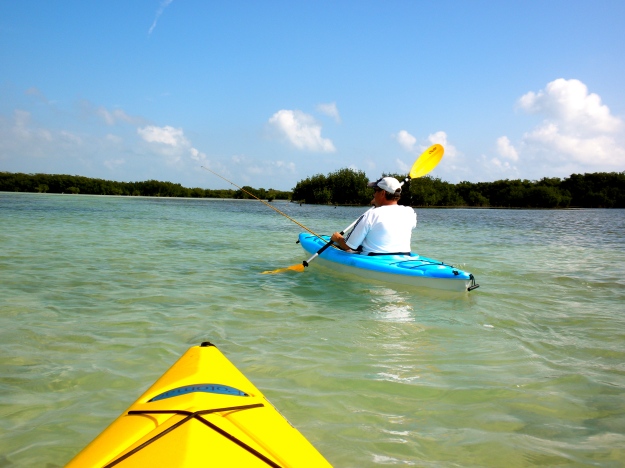 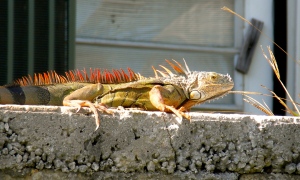 Saw this guy hanging out on the bulkhead

We’ve had a little bit of everything weather wise. Rain, wind, sun and of course the humidity.  For the most part, it has been great weather though and typically in the high 70’s.  Mike has been getting his fish-on daily and has been enjoying trying out different lures and locations.   He typically gets up early and heads out for a few hours while I snooze away and have a leisurely morning.  We have really settled into the laid back atmosphere!  We are looking forward to another week here to continue to kayak, fish and explore new areas. I’m sure we’ll head back into Key West a few more times, but there are so many other “Keys” to explore.   We are trying to balance the touristy stuff with off the beaten path experiences. One thing that has surprised me is there are not a lot of beaches.  I had in my head that we would take the kayaks onto a beach and sit at an open-air bar with our toes in the sand.  This is not the case, mostly marina’s/bulkheads to launch boats (there are A LOT of boats around here) and then the islands that are lined with mangrove trees.  In fact, I haven’t seen anyone swimming from the shore, just people out in boats.  Not a big deal, but just funny how your expectations aren’t always accurate.

I hope the New Year is treating everyone well.  My resolution is to continue to embrace what we are doing and try to let things roll of my shoulders when all doesn’t goes as planned.  This is a challenge for me, but I’m working on it!