I had been looking forward to this part of the trip; especially after all of the rain we had been experiencing!  Sunny skies and wine tasting – right up my alley! We have been to the Napa/Sonoma area a few times, so we were excited to try out some new wine regions in Northern Cal.   Mendocino County is more known for whites and sparkling wines due to the colder weather and close proximity to the coast.  Our campground in Albion was our home for the next 3 nights and jumping off point for exploration.

Our site in Albion (just south of Mendocino). Right under a very tall bridge and up against the ocean.

On our first day, we drove into the quaint town of Mendocino, located right on the cliffs of the Pacific, where we shopped around a bit and hit the visitor center for a wine map.  We decided to stay in the Anderson Valley and go to Boonville, about a 45-minute drive, then work our way back.  Ideally, we should have kept driving toward the Russian River region but we didn’t want to get too far from Albion. The first order of business was lunch.  We found a great spot, the Buckhorn, where I had a French Dip and Mike had a Ruben.  The waiter gave us some recommendations on wineries to hit.  We were able to make it to five as we drove back through Philo and Navarro.  It was interesting that most tastings were complimentary which is definitely not the case in Napa or anywhere in Washington.  Kind of refreshing.

We had one more day in the area and decided to head up to Fort Bragg and explore a little.  This would be our last stint on the coast for a few weeks as we were heading inland next, so decided to go enjoy the amazing views of the Pacific Coast.  It was a gorgeous day so we had some pretty nice scenery! We had an early bird dinner in town at the North Coast Brewing Company, then back to the MoHo to relax and get ready for an early departure the next morning.

Mike on the beach right behind our campsite

We got on the road by 9, always later than we think.  Our destination was Lodi – more wine country!  We actually had to retrace some of the road we had traveled when we went to Boonville, so we knew we were in store for windy roads, which are not fun in the MoHo.  This didn’t last long though, then we were on decent roads east to Lodi.  We arrived at the Flag City RV Resort, which was a very nice park with lots of amenities, but right off of I-5 and near a truck stop.  Surprisingly, it was very quiet and a perfect location for our 2-night stay.  Since we wouldn’t be here long, we quickly got set up and headed out to do some wine tasting!  Our friend Bill, recommended Jessie’s Grove, which we absolutely loved.  We had a very personable young gal pour for us who circled some of her favorites on our wine map.  Next stop was Michael David, which we could have skipped, but they had an amazing store with very reasonably prices fruits, veggies and baked goods!  We then headed downtown where the wineries are open a bit later.  We hit a new one, Toasted Toad, which is owned by a father/daughter.  We had a nice time chatting with them and got some great rec’s for dinner.  We decided on Rosewood Bar & Grill, and were able to sit outside as the temps spiked up quite a bit for us here vs. the chilly coast.  We had an absolutely delicious dinner!  French Onion Soup, Filet Mignon (Prime Rib for Mike) and Crème Brule to top it off.  We were stuffed and slept well!

We had a leisurely morning (well, started out this way), until we noticed the ANT PROBLEM!! Holy crap, there were these tiny ants everywhere inside and outside the MoHo.  Gross.  After inspecting outside, we noticed there were thousands of them making a trail up our water hose and one of our jack stands and making their way onto the MoHo and inside any opening they could.    Because of our slides, there are some access points that these little creatures can make their way through.  They are so small, but this just completely grossed me out that we had lines of ants making their way into our home.  Mike went to the store to get some spray for the outside areas and I began vacuuming up lines of ants.  They were everywhere including inside cupboards.  We think they were ‘sugar ants’ looking for food.   We asked our neighbors and they were having the same issue.   The front desk was very apologetic and said they would get out to spray our area.  Too late – the damage was done!  This was really an unfortunate incident because we really did like the park.  (Side note – we are still dealing with these ants days later even though we have left this RV Park – arghhhh!).

Tasting Room is a wine barrel!

We headed back out for some more wine tasting.  It was a gorgeous day (85 degrees), so we decided to forget about the ants for now, and just enjoy Lodi!  First stop was Oak Ridge, which was cool, as their tasting room was a large wine barrel.  We didn’t care for their wine though.  Next stop was Klinker Brick, which was recommended by a few people including our good friend Marc Pflu.  The Lodi area is really known for its Old Vine Zins and this winery did not disappoint!  We enjoyed our time here tasting outside on their back patio.  Next stop (and last of the day) was Harney Lane.  For me, this was my favorite one.  The tasting room was cool and modern with lots of cute gift items and the grounds were beautiful.  We ended up meeting a couple from Mill Creek here and ended up ordering a few bottles of wine and sitting outside for the afternoon. They were so easy to talk to and gave us some great tips for some upcoming stops.  We exchanged info and hope to meet up with them again somewhere along the way or back in Seattle.  A really fun way to end the day!  Unfortunately, we had to go back to the MoHo and deal with Ants!!!  More vacuuming and spraying.  Amazing that something so tiny can wreak so much havoc.  Mike was a bit more easygoing about this than me – surprise, surprise! 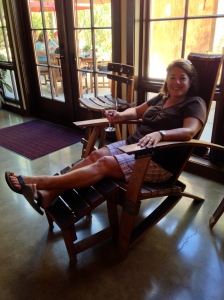 Harney Lane – Loved this one!

Off to Yosemite in the morning.

Note: We haven’t had wi-fi for a week, so we are a bit behind.  We will post about Yosemite later this evening.