We left Seattle on Sept. 11 and finally got on the road to Oregon – had to wait a couple extra days for a part to arrive for the MoHo. First stop was Cannon Beach and the Cannon Beach RV Park. Got in late that night, about 7:30PM; we usually are parked by 3 or 4PM. Landing the MoHo in the dark is a different animal, but we got set up and retired early as it was a long day. The next morning we headed back to Astoria for some sightseeing, and of course hit a local watering hole, Fort George Brewery and Public House. We then drove up to the Tower overlooking Astoria, unfortunately it was a bit cloudy and foggy, but still an impressive view none-the-less. We headed back towards Cannon Beach, stopping in Seaside. We walked the boardwalk (The Prom), and the sun came out for awhile so we stopped for a glass of white wine and enjoyed the heat of the afternoon outside on an outdoor patio overlooking the ocean. We got back to the MoHo and decided to take a picnic to the beach for a late night fire. We had a great view of Haystack Rock, what a really cool night! 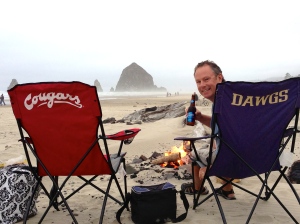 The next day we were off to Lincoln City. Along the way, we stopped in Tillamook at the cheese factory and made sure we left with lots of goodies! Both sides of my family had a place in Lincoln City – a condo at Spanish Head and a small house in the middle of town. So, I have been here many times and wanted to hit a few of the old places. We stayed in a nice park, Premier RV Resort, right on Hwy 101 on the south end of town. We arrived about 3:30 Friday night and when we checked in they told us about “happy hour” at 5PM that night, BYOB with food provided. Due to cold wet weather, they hosted the party indoors, and we met a really nice couple, the Champagne’s from Canada. I won the raffle – a logo’d wine glass! We were the youngest at the happy hours by at least 10 years : ) After the gathering, we just went back to the MoHo for dinner and relaxing.

The next day, the rains returned, but I had made a golf tee time at Salishan, so we were off to play at 9:00AM. Played with a nice couple, George and Joanne from Albuquerque, NM. After the round they treated us to a few beers in the clubhouse as they wanted to hear all about our upcoming adventure. They invited us to visit if we make it to Albuquerque. That afternoon I was needing to have my chicken wing fix, went to three different grocery stores to find them as I was not going to be denied. Stayed in that night, and enjoyed the wings and watched the Husky’s beat up on Illinois! This was my second attempt at wings in the MoHo and I believe I have now perfected the process! (oh and the Cougs won too). 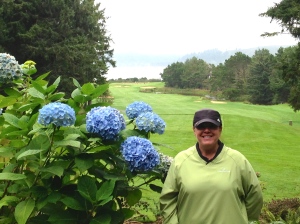 Golfing at Salishan – views of the ocean!

The next day was Sunday, and we were socked in with some really poor weather. We went to the farmers market, cool and showery and small. We did find a neat piece of art, made from a saw blade. This guy is talented and needs to charge 2-3 times what he is, but that is good for those of us buying his items. Afterwards, we decided to hit the local Casino, play for a few hours and then hit a favorite pizza place and head back to watch the Hawks game vs. San Fran. Well, we finally left the Casino at 10PM, watched the Hawks kick the 49ers tails from the tables and skipped the pizza for the night.

The next morning, a bit tired and hungry (hungover), we headed down to Newport to a breakfast place that was featured in a Seattle Times article that Traci’s mom had given us, Fishtails Café. Traci had the biggest French Toast in the history of the world, stuffed with cream cheese and topped with marionberry sauce. Huge does not describe this thing, and we saw at least 6 of these taken out of the kitchen to others in the café, amazing. We headed home after for a nap. Later in the afternoon, the clouds parted and sun came out and we went down to the Taft district for a walk on the beach. We were treated to a local guy catching a very nice Chinook salmon right there in front of us; it was probably 25 lbs. and broke the net some other guy used to try and help land the beast! Walked to the Inn at Spanish Head and back, and collected several small Agates along the way. Then, out to dinner at Gallucci’s Pizza, a favorite from years past. They did not fail as usual and we went home with a full belly and lots of leftovers for the drive the next day.

The next morning we were off to Florence. A guy from the happy hour recommended we stay at Honeyman State Park, so we made a reservation there. We pulled in and this was camping, well at least how we think of it. (Yes we had full hook-ups for the MoHo but no satellite or wi-fi). Very treed area, more privacy than a typical RV park, camping rings for fires, a very nice campground overall. We got set up and headed back to Florence for a drive around town. Had a quick drink on the Siuslaw River at some non-descript restaurant, with a great view. After we got back, we headed out to explore the Dunes on the back of the campground – wow these are cool. There are 40 miles of dunes here on the Oregon Coast, and you really don’t see much of them from the highway, but when you get into them they are massive! We made a nice pepper pasta with grilled chicken, watched a movie and called it a night.

The next morning we decided we would get out and use the kayaks finally!! We headed across the street from the campground to the lake on property, Woahink Lake. It only took a couple minutes to get into the water, and off we went. Nice day, but it did get a bit windy so we headed back to the MoHo and had some steaks, asparagus and vino for dinner!